A writers’ residency on the 365 acres of forest and feral meadow of a former dairy along the Stillaguamish River that is Smoke Farm. The goal is to offer time and space for writers by creating a realistic residency model.

Till is designed to be an affordable and flexible model of writing residency so that writers of all means can give themselves the time to write. There is no application process, Till is open to all writers and registration is open until all spaces are filled. We typically host approximately 45 residents per day.

Residents can attend for any duration that suits their schedule. Each day of the residency costs $40. If you attend for all four days the price is $140. This includes dinners each night and workshops.

We also offer discounted rates for volunteers. Duties include set up and clean up of dinners on Thursday, Friday, and Saturday night and clean up on Sunday. Interested? Email Us!

Dinners this year will be prepared by dream team Tessa Hulls and Hazel Greer. We are thrilled to welcome back chef, illustrator, writer, and powerhouse Tessa to the Till kitchen. Returning Tillers will remember Hazel and their deserts from past residencies. We do our best to provide options for all diets, however if your diet is particularly restrictive, please pack what you need for sustenance and you can access the kitchen as needed. 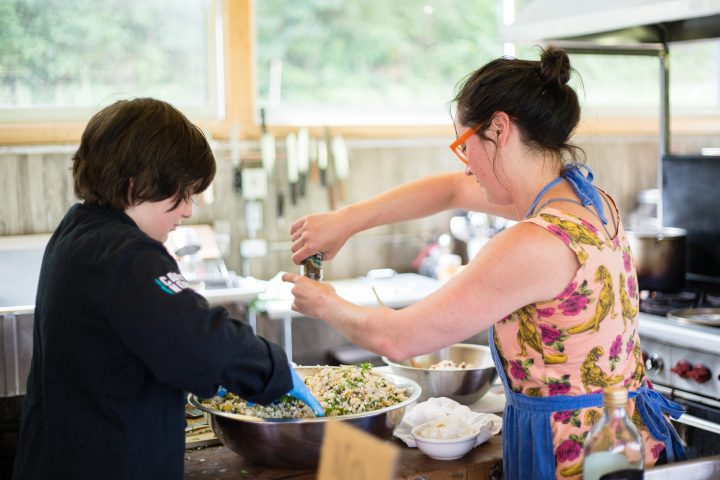 There is a large glorious kitchen for communal breakfast and lunch use. Bring what you need/want or handy things like vegetables, fruit, meat, bread and magic will happen—there are always people in the kitchen. That said, there’s always plenty of food and left overs from dinner, so no one will go hungry. We will put out grills for anyone to use. Just ask, and we will get one lit for you.

BYOB. Sharing is caring. We’ll bring cheap beer and a handle of whiskey for everyone. Dinner wine is appreciated.

The Farm is well designed and maintained. The buildings are unique and beautiful, but it is not a hotel. Call it: Scandinavian-inspired Modern Rustic. Bring your own bedding and unless you plan to camp, be prepared to share your sleeping space. Smoke Farm is an evolving multi-use space which means new sleeping and writing areas often appear each year.

Two outdoor showers are available. Two bathrooms are located by the kitchen and library and Honey Buckets will be available near the Loafing Shed where workshops are held. All water is potable.

Accommodations are figured out on a first come basis unless specific needs require some shifting around. We want everyone to be comfortable and trust that residents will be ready to help create a comfortable environment for each other.

The loft of the Wood Rick can sleep ten. This open air space is sometimes used for yoga and we ask you remove your shoes when entering. It is located close to the main common area so there is easy access to the bathrooms and kitchen. Because it’s situated next to the common area, you may hear writers chatting around the fire ring chatting into the evening. Staircase access. 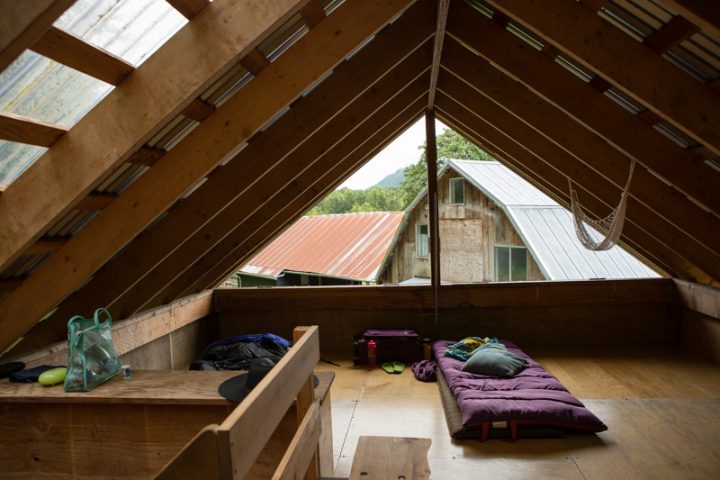 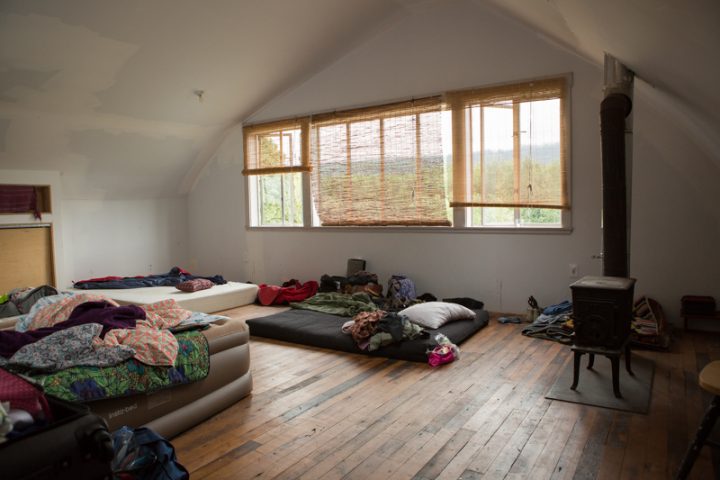 The loft of the Milking Parlor can easily fit sixteen. This space is above the library and bathrooms. Entirely enclosed and easy to heat up with a wood burning stove. Generally pretty quiet. Staircase access.

The Loafing Shed has a roof and could fit 300. A recent addition of an enclosed area fits up to 20. This is connected to the workshop area, a short walk down a gravel drive from the main common area. Honey Buckets are close and water is usually available from the outdoor sinks next to the shed. There’s a wood burning stove in case of cold. 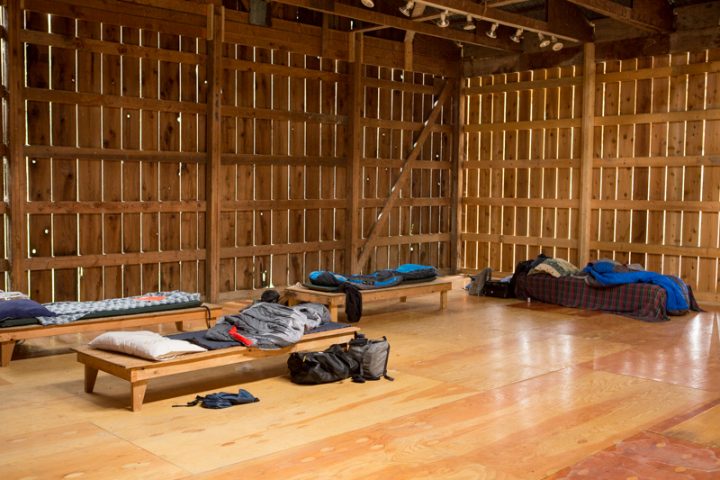 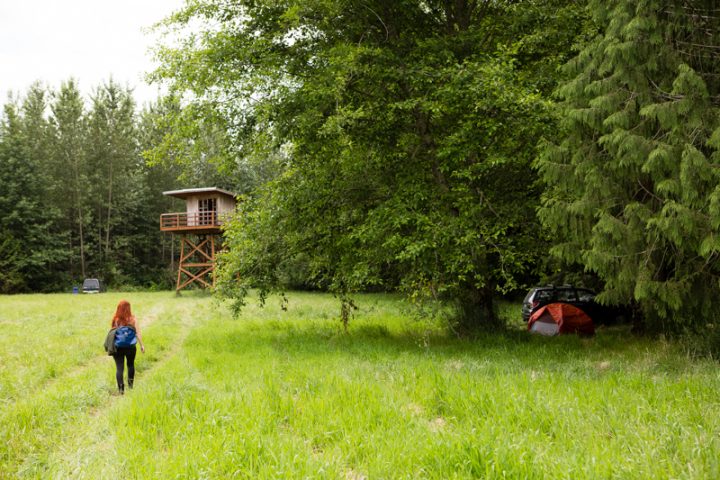 The Watch Tower sleeps three. A short hike through a field, sleeping here requires being comfortable with steep stairs and possibly some wasp friends (we try to clear them all out before residents arrive!). This space is removed from bathroom and water access.

Camping is one of the finest ways to experience the farm. Bring your own gear. 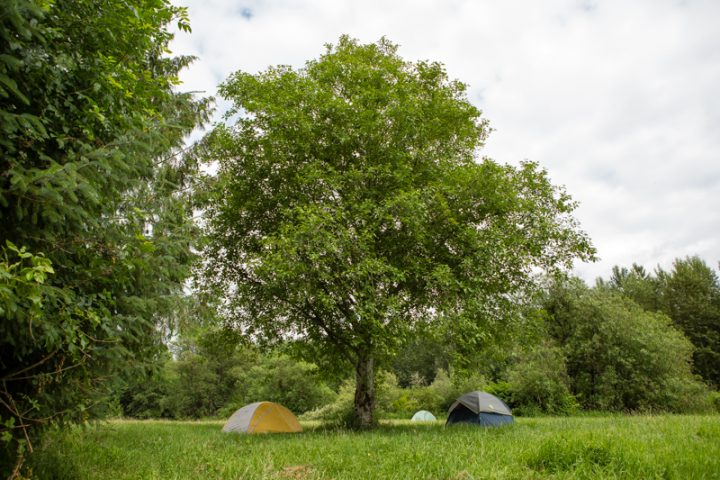 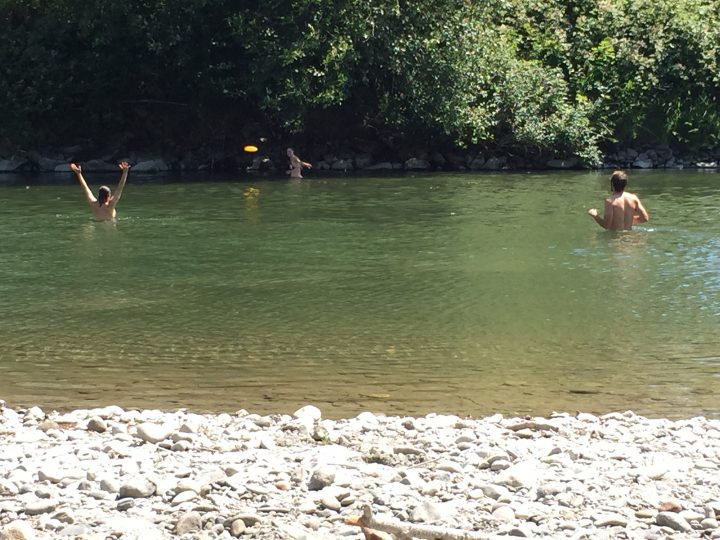 Bring boots, preferably water repellent
Bring a plentiful amount of socks
It may be too early for mosquitos, but bring repellant just in case
Bring a bathing suit for swimming in the river
Bring a water bottle and a thermos
Bring your sleeping bag/pillow/sleeping mat
A flashlight or headlamp will come in handy

Arne Pihl is a writer, woodworker and curator. He was a Jack Straw Writer and two-time participant in the (now defunct) Seattle International Poetry Festival. His work has appeared in City Arts, Vox Populi, LOCUSPOINT, on city buses, in vending machines, and as installation art for the inauguration of the City of Seattle’s All Rise project. A Northwest native, he lives in Seattle when the days are long and bright, and in a tiny, off-grid cabin in the Mojave desert when they are not.

Chelsea Werner-Jatzke is the author of the chapbooks, Thunder Lizard (H_NGM_N, 2016) and Adventures in Property Management (Sibling Rivalry Press, 2017). She is co-director of Cadence: A Video Poetry Festival in collaboration with the Northwest Film Forum. She has received support from Jack Straw Cultural Center, from Artist Trust, and from the Cornish College Arts Incubator. She’s received writing residencies from Vermont Studio Center and Ragdale Foundation. Werner-Jatzke has taught creative writing through Seattle Central Community College and served on the board of Lit Crawl Seattle. Her writing has appeared in Cream City Review, Bodega, Hobart, Sonora Review, and Tupelo Quarterly, among others.

Till began as whiskey-infused complaints.

The complaints were the need for time, solitude, and quiet away from the day-to-day in order to get writing done. We began as a free-form writers’ residency on the 365 acres of Smoke Farm and expanded to include the production of an annual chapbook and Seattle-based writing events.